Retrospect was born from a XBMC Script called Uitzendinggemist made by somebody called BaKMaN. It allowed playback of the Dutch public TV streams. It was however not kept up to date, so in december 2006 I decided to update the script to have it work again and called it Uitzendinggemist.v2. 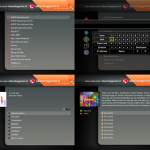 After some time I started extending the script with a larger history of episodes and eventually added more Dutch channels like RTL 4,5 & 7 and Talpa. As people were so enthusiastic about it more requests came for more channels. Because the original script was not made with the purpose of adding many more channels, I deciced to give the script an overhaul and to make adding a channel more straight forward.

I stripped the complete script and created separate libraries for url-handling, update-checking and logging. I implemented WindowXML which allowed skinning. Removed channels from the main script and gave them their own folder with their own media files. The result is the XOT Framework: XBMC Online TV Framework.

On March 29 2015 it was announced that XBMC Online TV will be changing its name to Retrospect. The main reason was the re-branding of XBMC to Kodi, which made the name XBMC Online TV no longer a valid one.