On May 15, 2014 I wrote a post on why it is very difficult to notice when a channel breaks. You can read that post here. The short version is that I am not Superman (or Batman or Luke Skywalker) and cannot keep track of all 60+ channel within Retrospect.

However, in Retrospect 4.1.0 more advanced statistics were introduced in Retrospect. The previous statistics only provided us information on what channels were being browsed and what videos were being played. The new and more advanced statistics now also tell us when an error occurs. So you could basically say that, although I am not Batman, I do a have a new side kick called Google Analytics, and together we can now tell if a channel broke without even running Retrospect!

So how does this work? Actually simple, besides sending out some info on successful events, Retrospect now also sends out a signal when something does not work as it should. This includes:

In the latter two cases, Google Analytics also receives what url Retrospect was trying to process when it fails. That way it is a lot easier to investigate.

So how does it look? There are 2 main sources of information: the real-time statistics shows information of events that happened the past 30 minutes. This includes, playbacks, listings and errors. The screen shot below shows the situation last night, when SVT had an issue with the listing of “.: Senaste Programs :.“. Usually Listing a folder should not result in any issues unless there is a parsing problem. The Play items are a bit harder, as some are DRM or geographically protected. Those will be filtered in the next version of Retrospect. 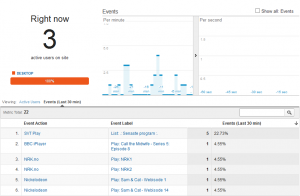 The second way is by looking at trends of days. The following graph shows the number of errors of SVT over the past 10 days. And there we can also see that something is not right. It clearly shows the errors increasing starting on the 30th of  March. So even without real-time information, issues can be detected over from the historical view and after the SVT update I pushed today those errors should slowly disappear. 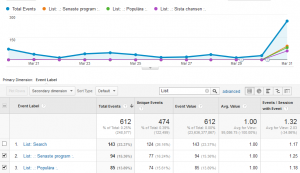 So, are we big brother watching you? Nope, we are not. We even added an opt-out in case you don’t want to send out statistics. You can just disable them via the Add-On settings and then nothing will be send to us. But keep in mind that this also prevents us from detecting issues before hand.

So what else? Well, we already had a page with all available channels. That page is now converted into a status page, that shows the statuses of all the channels. The indicators are in traffic light style:

The place now serves as the first place someone with issues should go and visit. If a channel broke, it will be updated there. If there is an active BitBucket ticket for it, it will also be shown in this list. And last, but no least, when an update has been pushed that fixes an issue, it will also be posted.

In general I have to say, that adding these statistics has been a real step forward. Over the past weeks more than 75% off all issues were discovered by the statistics. And those issues were usually fixed before the majority of the users even noticed them! So, thanks Google Analytics for being free and allowing us to do so many nice and useful things!